As mentioned in my previous post, this series will no longer be a talk about DDD as a blog app is too trivial to show ( learn ) the power of it. I will be using some of the patterns of DDD though. So I have changed the name of the app I am building. It will be called MyPersonalBlog ( MPBlog ) henceforth.

The project structure has changed a bit from what I had shown here. There is no longer separate layers for infrastructure and domain. I have clubbed these 2 layers into a single Core layer. The other layers are just the same. Lets get started by creating our domain objects.

So far we have created a entity base class from which all our domain ( models ) will inherit from. In a blog application, we’ll have posts, tags and comments. So lets create classes for each of these. I have created these classes as shown in the class diagram below. 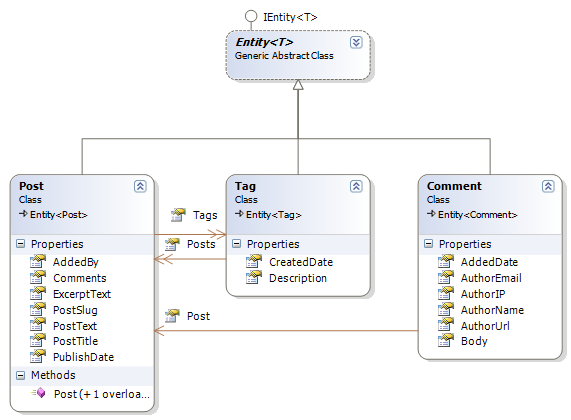 From the diagram you can see that there is a many-to-many relation between Tag and Post class..

I am using Fluent NHibernate to configure the mappings of these classes to the database. Although you can map all the classes using the automapping feature which has a convention based API, I will use the mapping per class feature. Lets look at the mappings.

We create a PostMap class which inherits from the ClassMap<T>. The constructor of this PostMap class is where all out mappings go. As can be seen, first we specify the table name for our Posts, Then we specify the Id property which is mapped to the PostId column in our database. The Id in our case is the id that we had declared in the Entity base class ( I have renamed the Key property to Id ). If you recall from my previous post, it had only the getter property. The value is assigned by NHibernate. We specify a many to many relation between posts and tags through an intermediate table PostToTags. We have also specified that a post has many comments thought the Comments table The other mappings are self explanatory.

Out Tag and Comment mapping classes look similar to the one above. Following are the two mapping files for these.

Now that our mappings are done, lets create a SessionSource to access the NHibernate Session.

We can create a session through the ISessionSource interface in Fluent NHibernate. Lets create an interface for the SessionSourceConfiguration.

Note: The following is based on the FubuMVC contrib project.

The ResetDatabase property is used to either create a new database from our mappings or reset the database. We have a method called GetProperties from which we generate the connection properties.

As you can see in the CreateSessionSource method, we are passing a PersistenceModel object. This object is used to add the mapping from a specified assembly, in our case, where we have defined the Post, Tag and Comment maps. Lets call it MPBlogPersistenceModel. Here is what it looks like.

The PresistenceModel object, connectionString, and resetDB parameters are injected using an IoC container which we’ll have a look in a later post.

That’s it for now. In my next post, I’ll discuss about the repository and the unit of work implementations. Any sort of feedback will be appreciated.